This article was first published in India Currents Magazine on April 7, 2020. It is based on this blog post.

We are weeks into widespread social distancing in many parts of the world, though it feels like months. Cases of COVID19 continue to mount, as expected, and we watch Italy and Spain for signs of when our society might be cast into crisis and chaos. Health care workers, the heroes of our time (and of all times, really), gird themselves for a flood of respiratory distress cases, projected to peak sometime in April. Physicians and nurses of all specialties are being asked to update their ventilator training in anticipation of being called to the front lines for service. Yet many fear that they will not have sufficient weapons for this fight, such as masks and ventilators.

At this time, it’s important to remember that COVID19 has a global case-fatality rate of about 2 to 3%, lower in the USA, meaning that most people will survive this. In the words of Larry Brilliant, “this is not a zombie apocalypse. It’s not a mass extinction event.” What is it, then? This is, and always has been, a health systems crisis more than simply a health crisis.

In a health crisis, we await salvation from a lucky mutation, a change in seasons (that will likely have no effect on this virus), a vaccine, or a cure. But in a health systems crisis, we can manufacture our own salvation through proper preparation, investment, leadership, and resource management.

In the early phase of a pandemic, it is possible to identify infected individuals, trace their contacts and quarantine them. Once there is community spread, the focus shifts to isolating populations and hardening the hospitals against the onslaught. We are clearly in this second half now. 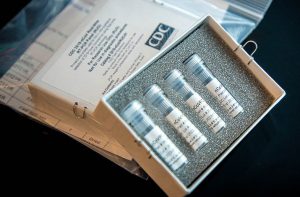 At present, America’s one million hospital beds are not completely saturated by the number of serious COVID cases, except in overwhelmed places like New York. But in anticipation, health systems managers in many states are struggling to procure PPE (personal protective equipment), ventilators, and even sufficient front-line staff. But there is another way, and both Singapore and South Korea have shown us the first steps on that path.

With an extreme national lockdown that only permits movement of emergency personnel and essential services, lasting a couple of months or more, the number of new cases can be kept to a slow simmer. This is because it would take longer for new infections to occur, while allowing time for existing infections to resolve. The more severe the isolation, the longer it would take for a new case to emerge. The epidemic then recedes to a small number of active cases and a non-newsworthy number of hospitalizations.

The more lax these restrictions, and the slower governments are to enact them, the higher the peak of cases and deaths, and the longer it takes to push the rate of new infections down to a manageable number. But once that is achieved, we can all breathe a little easier.

The Institute for Health Metrics and Evaluation (IHME) predicts that proper social distancing would see the end of the first wave of the epidemic by early June. The timing of the arrival of a second or even third wave depends on the public health interventions made when the first wave abates.

This post-lockdown, post-first wave scenario resembles the early phase of the pandemic, with a few cases and contacts. That, then, is the time to apply the force of a newly resourced awesome preventative public health system. The secret weapon is something that exists now, that we can manufacture or purchase: tests, and lots of them.

The deployment of rapid, frequent, public testing at a national scale would allow society to return to productive normalcy while keeping the disease to a simmering annoyance.

A Herculean investment in the flotilla of new testing options now becoming available, including rapid 15-minute in situ and at-home testing would give us the epidemiological data to control the outbreak. With sufficient human resources support, every case could be quickly identified and isolated, their contacts immediately traced and tested, as well.

This would require a commitment to a strong and well-maintained public health infrastructure. But such an investment would be a pittance compared to the costs of either the expansion of our hospitals to accommodate throngs of dying patients or the economic cost of many more months of isolation.

In particular, the serology or antibody test would be critical for managing our staged return to society. Such a test would detect the products of the body’s immunological response to the virus, and would therefore tell us if a person were currently or previously infected. If the latter, then they would presumably be immune, and would be granted a free pass to return fully to normal life.

While several serology tests are now on the global market, some jurisdictions do not yet licence them. The challenges are largely scientific. First, the test cannot distinguish between past and present infection, so it would have to be followed up with another test to detect the presence of the virus and therefore determine if the person was still infectious. Second, the potential for false positives is high as it might detect antibodies to other coronaviruses, such as the common cold. And third, it is not yet known how much antibody needs to be present to confer immunity.

On the other hand, the more common nasal swab test, employed on a wide scale in almost every city, relies upon a well equipped laboratory to render a result. But a global shortage of the crucial reagents has resulted in a backlog of pending tests in several places. In many cases, university research labs are being raided to help supply the public health laboratories.

Given that expanded testing, absent a cure or vaccine, is our best path out of the pandemic morass, a natural question is whether the shortages and backlogs could have been avoided. The answer, unfortunately and unsurprisingly, is yes.

Years ago, the Obama administration put together a comprehensive pandemic response plan that included policy provisions for acquiring critical equipment. That plan was scrapped by the current administration, undoubtedly contributing to the apparent inconsistencies and lack of direction in the national response thus far, and to most states’ inability to acquire PPE and testing kits.

The politics of this failure are tied up in the ideological and personal conflicts between the present and former administration, as well as in the unending tension between private and public sector solutions, pertaining to the question of which sector is best equipped to order, manage, validate, apply and monitor the deployment of tests on a national scale.

Health care system crises like the COVID19 pandemic are not elemental disasters delivered by the gods, but rather are manageable aspects of 21st century globalized life. They can be overcome with good leadership, investment, and planning. Thus far, the leadership has been disappointing, the investment late, and the planning ignored. But there is time yet for these problems to be solved, not by the rare and precious front line clinicians risking their lives, but by the administrators and policymakers, of whom we have no short supply.

Raywat Deonandan, PhD, is an Epidemiologist, Associate Professor and Assistant Director of the Interdisciplinary School of Health Sciences at the University of Ottawa in Canada. www.deonandan.com