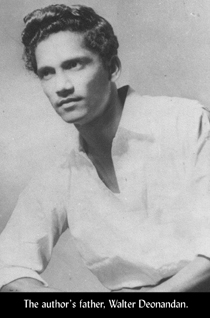 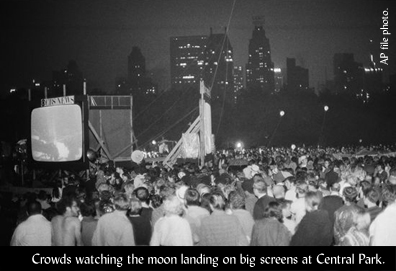 Forty years ago, my father took a walk to Central Park. He was a day away from his 37th birthday, and had just moved his young family from an impoverished rice-farming village in rural Guyana to the bitter proletariat soup of 1960s New York City, in search of Americas fabled economic and political salvation. With my mother left to tend to me and my siblings at our scary little run-down apartment a few blocks away, my father was no doubt weighted down with responsibility. It was an undeniably courageous act for my parents to have abandoned everything that was familiar in a desperate gamble to create a better future for their children. Theirs was, of course, a story told a thousand times over in that particular city.

My father’s destination was Central Park because that’s where the city had set up a big television screen. Thousands of people had convened to watch blurry, otherworldly scenes that were broadcast in black-and-white, in between bouts of loud static. In a display of a completely different kind of courage and emigration, Neil Armstrong and Buzz Aldrin were taking their first steps onto the surface of the moon; and the world –for the first time united through a feat of science– held its collective breath in awe.

Much was made of the fact that that first man on the moon was American. Indeed, the moon race itself was propelled by a political race between the United States and the Soviet Union; and the Apollo moon program was funded by unbelievable largesse from the American taxpayers. But it’s important to keep in mind that the triumph of Apollo was a transnational achievement owned by all of humanity. The name itself, Apollo, was of Greek origin. The theories and mathematics that formed the foundation of rocket technology were Russian, Indian, German and –depending on how far back one wishes to take it– Babylonian. The rocket technology itself was the product of German engineering, remnants of Nazi warfaring brilliance, its evil turned to peaceful, exploratory purposes. Half of the engineering staff was Canadian, refugees from Canada’s terminated Avro Arrow fighter plane program. And tracking stations scattered in countries across the world, most notably Australia, were critical in making sure the three loneliest human beings in the universe were not lost against the infinite canvas of black space.

More importantly, the moment that Armstrong’s feet touched the lunar sand, his achievement became owned by all of us, regardless of race, citizenship, age or gender.

It must have been an important moment for my father. Like so many others in the park that day, he was a poor immigrant from a poor country, beset with worries, and overwhelmed by the challenges of navigating America’s wildest city with no guide, resources, roadmap, or safety net. The steps he had taken alone from the apartment, to stare up at the glowing screen, were no less significant than Armstrong’s dangerous steps from the Lunar Lander, to stare up at the glowing Earth.

Both men had found themselves in an alien land with backbreaking responsibilities. Both had a plan for success, with a high probability of catastrophic failure. And both were, in their own particular ways, profoundly alone in their travails.

But both also shared a particular strength: they had each eschewed cynicism and had chosen optimism. They would both work to maximize their chances of success, maintaining the discipline and sacrifice necessary to attain their goals. They had both recognized that the price of failure was far too dear.

America did not provide my father with the economic salvation and opportunities he sought. So he took us to Canada shortly after that historic day. In his view, all the glories of America, the space program among them, were mostly the domain of white people. He had often warned me that my path might prove to be harder than my more lightly-shaded friends, that some doors might always be closed to me, as they had been to him, due to nothing more than skin color.

I do not think he could have ever imagined that 23 years hence, I, his youngest son would submit an application to the nascent Canadian Space Agency to become an astronaut. It was the first time that Canadian civilians could apply, and I was determined to be a part of that historic occasion. My application was denied, due in part to the impressive caliber of my competition, and in part to my youth and lack of relevant experience; it was not an unexpected result. But I remember that when I sealed the envelope bearing my application, I was overcome for a moment by a feeling of awkward profundity and historic contemplation.

It had taken a mere four years between the launch of the first artificial satellite, Sputnik, in 1957, and the successful orbiting of the first man in space, Yuri Gagarin, in 1961. Only eight years later, Armstrong walked on the moon. A couple of decades later, a non-white, naturalized citizen was able to apply to the space program and be given a fair shot.

In the same time span, my father had made a home for his family in Canada, raising five children to successful, professional adulthood in an era well before the feel-good buzzwords of multiculturalism and global citizenship. He and my mother rest in placid retirement today in downtown Toronto, contentedly contemplating their eventual afterlives, as is the Hindu tradition, and considering a completely different type of cosmic migration.

We have come far indeed.

Space travel and lunar exploration as a metaphor for emigration and diaspora is not yet exhausted. The tendency of human beings to brave unseen dangers to explore new worlds will continue to serve as an inspiration for those who seek the betterment of themselves and their families.