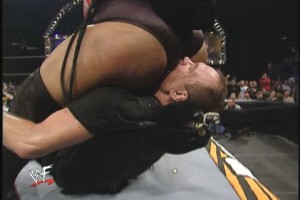 The Stinkface Of Enlightenment

…Canadian communists amass at the border!

In the immortal words of Dave Foley, “Keeping in mind that I am Canadian and therefore a Communist….”

The following is an excerpt from National Security Presidential Directive 17, signed by George W. Bush in the days leading up to the invasion of Iraq (emphasis mine):

This is not the forum to discuss whether Directive 17 is a wise move. But, give me a break! “including potentially nuclear weapons”??!! My dick is potentially a nuclear weapon if you irradiate it long enough! What these morons meant to write is, “potentially including nuclear weapons.” The difference may not seem palpable to the layperson, but this is a legal document supposedly drafted by the finest neocon minds dirty oil money can buy. The least they can do is get their grammar straight!

Now on to the wrestling:

I got some good feedback after the last column, in which I listed some of the things about the current WWE product that I actually enjoy. I was very pleased by the volume of responses, since list columns are so easy to write. Well, since my laziness knows no bounds, here’s a sequel. This time, though, I’m going to list some general observations I’ve made of the product. Some might be positive and some might be negative, but they’re all… um… mine. Yeah.

I clicked on one of those throwaway weekend shows a couple of days ago. What’s it called now? Heat? Jakked? Wanked? I can’t keep track anymore. There was this buffed-out bald semi-black dude doing some passable wrestling to muted crowd response. Then I realized —Ohmigod!– it’s Maven!

I remember noticing that when Maven made his debut, he looked significantly less muscular than other wrestlers. Still, compared to the average dude, Maven was a big fellow. Now, I’m not a real doctor (I just play one in singles bars), but I do know that a man –especially one who is already muscular, regularly working out and at peak fitness– does not gain that much additional muscle mass in only a few months. At least not without some assistance. So draw your own conclusions.

(The 411 legal team wishes to assert that Dr. Deonandan’s statements are in the hypothetical. His missives should not, in any way, be construed as accusing or implying by statement or omission that any WWE employee is ingesting substances, legal or otherwise, for the purposes of physique enhancement. The 411 legal team wishes to further assert that Dr. Deonandan is a godless Canadian, and hence likely a Communist, and therefore not qualified to assess patriotic American physiologies.)

2. I Take It Back — Coachman Sucks

In the last column, I said that I was actually enjoying Jonathan Coachman’s commentary, mostly since I was so sick of JR’s mindless babble. I take it back. Wholly and without reservation. In the last couple of weeks, I’ve come to suspect that Jonathan Coachman might actually be retarded. And remember, I’m a doctor. I should know.

(The 411 legal team wishes to remind the readers of 411mania that Dr. Deonandan holds a weak PhD from a third-rate Canadian university, which is probably run by godless Communists, but holds no medical licence recognized in these free, beautiful and patriotic United states of America. His ability to diagnose retardness is therefore bullcrap. Legally speaking, of course.)

So an old dude who bears a striking resemblance to one Terry Bollea happens to be Mr. America. Well, I like it. Of course, I loved the old “Hulk Machine” and “Giant Machine” characters from the 80s, too. This is something the WWE creative team should be able to do right. We all know their writers don’t know shit about wrestling. But they were hired for their experience in comedy writing, so now is when they are supposed to show us their worth.

Mr. America can be used to elevate La Resistance or Team Angle. Hell, they can throw together any unused talent to form an Evil Foreigner Contingent. In these bigoted times, even the FBI and Los Guerreros might qualify. And where exactly is Dudleyville, anyway? Godless Communist Canada, perhaps?

Okay, this isn’t really an observation. I just miss midgets in wrestling. I think they could play an important filler role. So many wrestlers seem to be screaming for factions in which they can shine as a leader. Midgets can be used to flesh out stables without presenting ego concerns. John Cena would do well to be seen hanging with some gangsta gnomes.

Sorry, this one isn’t an observation, either. Just had a flash. Rikishi is in the doldrums, right? No one cares about his character, but the man can still perform, and the office seems keen on pushing him. So why not re-package him as The Buddha? Sure, it would be offensive, but that hasn’t stopped WWE before.

Buddha is a peaceful man, into non-violence, mediation and meditation. But his high priests Tajiri and Funaki have other ideas for him. They constantly goad him into combat, and each time a piece of the great man shrivels, until finally he re-emerges as Evil Heel Buddha! With his devastating finishers, “The Sound of One Hand Clapping” and “The Stinkface of Enlightenment”, he wreaks havoc throughout WWE until finally stopped by…. Sting! (With requisite born-again help from Shawn Michaels and Jericho’s midget army.)

(The 411 legal team wishes to remind readers that, as a godless Communist Canadian, Dr. Deonandan’s offensive heathen views are not representative of the good, Jesus-loving folk at 411mania.com.)

I have a question. When in deep thought, does anyone actually look at the ceiling and stroke his chin? Or is this strictly a wrestling thing? When Nash was pondering his world-stopping decision of whether to join or reject HHH, there he was backstage, looking somberly upward and stroking his chin. Other wrestlers do it, too. Look for it. Is it in a brochure all new WWE employees get during the orientation seminar?