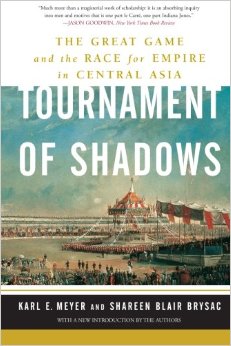 Review of Meyer and Brysac’s Tournament of Shadows

This article was published in the May 2002 issue of India Currents Magazine, under the title, “The Great Game.” It appears here with the author’s permission.

The political science journal Foreign Affairs calls Tournament of Shadows a “tour de force,” while Kirkus Reviews describes it as “swashbuckling.” Universally, it seems that reviewers are drawn to this book’s adventurous tone and its mind-boggling scope. As an historical treatment of the “Great Game” –the battle for influence over South and Central Asia by Russian (then Soviet) and British (then American) powers– Tournament of Shadows is a remarkable achievement thick with validating reference and analytical context. As a curl-up-by-the-fireside escapist read, this non-fiction account of the adventures of Western and Asian explorers covers 200 years of real-life Indiana Jones escapades. This combination of political science and romantic yarn is quite a feat.

Rife with scholarly content which sometimes slows the narrative, the book tells a grand sweeping tale of European interest in the lands just north of India, primarily Tibet and Afghanistan. It begins with a chapter evocatively titled, “The Horse Doctor”, about William Moorcroft, a veterinarian of the early 1800’s sent to these heretofore unexplored and mysterious lands (by Western reckoning) to seek out new horse breeds for the British Indian army. Moorcroft’s tale, like so many in the book, warrants a decent Hollywood big-screen telling. It is replete with episodes of bravery, treachery, disguise, espionage, deception, being sold into slavery and escaping from captivity.

The stories of the “pundits” are equally as cinematically riveting. These Indian spies were sent into Tibet posing as religious pilgrims. They practiced walking with an evenly spaced gate which did not change even while climbing, and marked their steps using specially rigged prayer wheels, resulting in surreptitious and remarkably accurate maps of a region officially forbidden to outsiders. The adventures of mapping expeditions, repeated through two centuries and zestfully told, are of particular interest to the authors, who imbue the cartographic sciences with nobility and sublime poetry– “Maps are to exploration what scriptures are to theology: the font of authority for ascertaining truths distantly glimpsed.”

The scope of this book is nothing short of awe-inspiring: from the treks of Moorcroft and the pundits to the seduction into Christianity of the Sikh prince Duleep Singh; from backroom deal- making between the Dalai Llama and various Western powers to a secret society formed by Teddy Roosevelt’s sons and wealthy Americans; from the selling of Russian slaves on the Afghan market to Nehru’s entry into the church of Theosophy; and from the Nazi search for an imaginary Aryan motherland to the Chinese invasion of Tibet and incursions on the Indian frontier. If this tome suffers from anything, it is of too grand a vision and too thorough a telling.

If nothing else, Tournament of Shadows is a treatise on the attitudes of Western empires of the last two centuries, an important subject at a time when the modern American empire stretches its powers to the same lands on which the Great Game was once played.

Raywat Deonandan is the author of Sweet Like Saltwater and an owner of The Podium. His personal website may be found at www.deonandan.com.