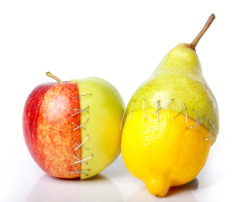 The Promise of Biotechnology

This original Podium article (from March 27, 2002) was re-commissioned by Strategic Health Innovations, Inc. for that company’s Nov/2002 newsletter under the title, “The Public Must Be Taught About Biotechnology.” It appears here with the author’s permission, though all rights remain with SHI.

For those of us working the biotechnology sector and related fields, the fast pace of innovation and discovery is an exciting harbinger of the exciting breakthroughs to come. Many of us envision our work as a small contribution towards — among other positive outcomes– future improvements in health care and the expanded efficiency of food production for the benefit of all. Yet once we step outside of industry circles, we often find that professing support for biotechnology research sometimes makes us pretty unpopular. At times, we even risk being perceived as an enemy of nature: in the public eye, biotechnology is synonymous with genetic modification (of foods, animals and eventually humans). And given the pervasiveness of GM (genetically modified) crops, support for biotech is also seen as being dismissive of the public’s right to choose. Such attitudes have spread among the public, born of a growing distrust for the dispassionate goals of big business and seemingly partisan governments. For, in the words of Dr. Ann Clark, a crop scientist at the University of Guelph, “What’s best for industry is not necessarily what’s best for society.” (1)

With respect to technology transfer and community uptake, then, the challenges facing the biotechnology industry are how best to engage a doubting public and how to ensure an optimal assimilation of innovative discovery to improve the lives of the population. The biotech revolution has arrived, of that there is no doubt. The ease with which this revolution will be incorporated into the daily workings of citizens’ lives is still uncertain, as is whether our existing institutions are sufficiently equipped to make such transitions universally beneficial. The price of moving ahead without proper investment in such channels is only now beginning to be appreciated. While it is often disconcerting to hear the increasingly fearful and critical public discourse on the subject, it is only by generating discussion around these topics that we can begin to resolve some of the difficult issues involved.

Dr. Clark has been vocal in her criticisms of “narrowly focused” molecular biologists who are unable to appreciate the economic and ethical consequences of their research. Despite the enormity of the topic, according to Dr. Clark, in the late 1990’s a mere 1% of the total US biological research budget was dedicated to assessing risks (1). Given this paucity of risk analysis, it’s not surprising that deleterious effects began to be observed.

Last year, Monsanto Corp.’s modified canola crop became a weed when it migrated to unintended fields in Saskatchewan, unsurprisingly proving resistant to almost all forms of pest control. Such a scenario was predicted by some theorists, yet the risk was not addressed and Monsanto’s solution was to pull the invading plants out by hand. So much for the labour-saving benefits of this technology (2).

However, despite these dangers, activists’ calls for the elimination of GM technology are unrealistic. Resistant potatoes, canola and soya beans are all products we consume daily by virtue of a technology that commands hundreds of millions of dollars per year in research funds. GM is now the mainstream. The recent declaration by the President of Zambia that his country will no longer accept food aid in the form of GM “poison” (3) is indicative of a mistrust that can translate into dire consequences, since Zambia’s 2.5 million starving people can receive aid only from those sources most able to provide it, namely nations like the United States, whose yields are almost entirely associated in some way with genetic modification. According to Dr. Mark Sears, another Ontario crop scientist, “It would be easier to label products that contain no genetically altered materials rather than those that contain some.”(1) Our energies are now better spent to: contain further possible deleterious outcomes, establish a more rigorous framework for risk analysis and educate the public about the favourable cost-benefit ratio afforded by biotechnology.

It must be remembered that for every report of a deleterious outcome, there are scores of successes. But increasing food production does not make as newsworthy a story as a GM weed run amok or the leader of a starving nation refusing food donations. A first step in balancing the scales of public opinion is for the biotechnology industry to more vociferously proclaim its successes and benedictions. The public must be reminded regularly that GM crops have an enhanced nutrient composition, result in a higher yield and demand much less chemical pesticide support. Biotech industrialists should loudly celebrate their victories over disease and suffering, from the synthesis of human insulin from modified bacteria –which revolutionized the treatment of diabetes– to the fortification of staple foods with vitamins and nutrients, allowing throngs of disadvantaged people in the Developing World to approach the health status of those in the West.

The Earth’s supply of arable land is shrinking at a dramatic rate. Combined with political and economic factors, this has resulted in 800 million people worldwide not getting enough food, and 500 million being chronically malnourished, including more than one third of all human children (4). The crisis looms large, since the world population will top nine billion in less than fifty years. Biotechnology has a role to play in slowing this Malthusian spiral. After all, it’s estimated that basic immunization alone, an early and relatively simple biotech development, has saved the lives of three million children in the last 20 years alone (4). Biotechnology can multiply the effectiveness and dispersal of such boons, using such innovative techniques as embedding vaccines in food crops and animals.

Unfortunately, the clumsy handling of the GM foods/crops issue has spawned a growing distrust of all biotechnologies, allowing critics to confuse GM foods with cloning and genetic therapy. This is frustrating because much of humanity’s salvation may be realized in today’s biotech labs: the reduction of the use of broad-spectrum insecticides, cheaper production of foods and pharmaceuticals, and, of course, an increase in crop yield. At a 1999 meeting of the Toronto Biotechnology Initiative, Dr. Sears made the bold prediction that, “genetic engineering will sustain us for the next 50 years.” (1)

Biotechnology has been with us for decades. Engineered vaccines no longer confer a risk of infecting the patient, and require fewer, smaller and less frequent inoculations. The mass production of insulin and hormones, via the engineering of bacteria, has saved countless lives by making such drugs affordable, more effective and less ethically circumspect. (They were previously extracted from slaughtered animals or human cadavers.)

Furthermore, stem cell research promises to revolutionize medicine. The science of proteomics is ripe for the production of patient-specific pharmaceuticals. And futuristic nanotechnology, which involves injectable microscopic robots, is virtually a reality. The potential of biotechnology to improve our quality of life is seemingly limitless.

Still, many in the public fear that technologies will run amok with canola-weed vigor, fueled by uncontrolled commercialism. Zambia’s claim that its citizens are being used as “guinea pigs” for testing GM foods (3) is not without historical precedent, as commercial forces operating outside an established ethical framework have been known to criminally pollute the reputations of those who play by more acceptable rules. Without a doubt, capitalism is what has permitted the explosive evolution of these technologies, improving both therapeutic care and social wealth. Strategic Health Innovations projects a $6 trillion global industry based upon the meeting of biotechnology with information technology, providing the carrot for the acceleration of this kind of research. What we must learn from our experiences with GM foods is that these new technologies must be tempered with appropriate risk analyses and controls, and policed by an industrial body whose interests must lie in the maintenance of a good relationship between the sector and its customers, most likely through the promotion of citizens’ right to choose whether or not to participate. Many may feel that Zambia’s position is irrational, unworkable and ultimately detrimental to its citizenry, but we must also accept that the choice is theirs.

In essence, biotechnology leaders can be champions of social rights, so long as they wield this influence in coordination with a campaign of impartial education about the nature and significance of their products and technologies. If the appropriate instruments of social responsibility and public education are in place, there is no reason that biotechnology cannot show us an age of prolonged life, increased food and better health.