….and more on how Wrestling is art.

For the record, the Ultimate Warrior is an idiot.

Today, I’m going to talk some more about wrestling as art. But first, some things I need to share…

I’m addicted to Ebay. Since moving to the USA from Canada a couple of years ago (and hence being able to more easily effect all my financial transactions in US dollars), I’ve spent hundreds –or maybe thousands– on Ebay items. Last week, I sold $300 worth of crap –I mean, valuable merchandise– then promptly spent the cash on furniture I don’t need. Like I said, I’m addicted. Two years in the USA, and I’ve already abandoned my socialist roots in favour of unrestrained capitalism.

Still have a couple of items left, if you’re interested in contributing to my continued fall from socialist grace.

About a year ago, I found item 1752716824 being sold on Ebay. It was supposedly Curt Hennig’s used chewing gum. I wrote in this column on July 26, “Maybe one can extract DNA from the dried saliva and clone a completely new Hennig, except with healthy knees and better manners?” Now, of course, I wish someone had done so. We’d still have a little Perfect left.

With Hennig’s passing ends an era of professional wrestling. Sure, there are some of the older guys still around: Undertaker, Flair and Hogan, for example. But there was something special about having around a great midcard wrestler who could still go at 44, but who also remembered the territory days. It’s very telling that Bret Hart had said that Hennig would be his first choice as opponent for Bret’s theoretical farewell match.

I know I’m a little late with this, but here are some of my favourite Hennig memories:

It’s odd that my list doesn’t include any of his great matches from his first run with the WWF, or any of those famous skits. Oh well. Wish I’d bought that fake chewing gum now. 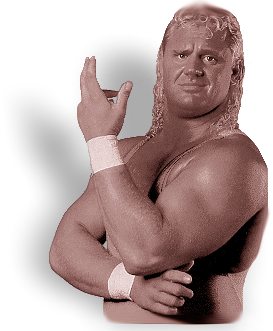 Okay, on to today’s topic…

I was just reading snippets of an interview between an old acquaintance, Russell Smith of the newspaper The Gobe & Mail, and uber-successful and pretentious Canadian poet Christian Bok (who is also the ex-boyfriend of my ex-girlfriend; draw your own flowcharts, kids). The gist of the interview was this: the audience is often the biggest obstacle to art. By demanding conventions, you see, the audience prevents the artist from growing into new forms of expression.

Now, Smith and Bok (to whom I will now refer as “Smok“) were talking about snooty “sophisticated” art, like avant-garde poetry, high literature and unconventional visual styles. But there is an application of their snootery to wrestling, which, as I’ve oft said, is a kind of performance art.

As Smok contend, “Really good art… tends to acquire an audience of non-experts.” In wrestling parlance, when both the writing and grappling are hitting their stride, the arena ranks swell with more marks than smarts. The temptation, like a feedback system, is for the product to respond by catering to the new demographic. This means altering storylines, script specifics and characterizations to be more comprehensible by the masses. The result is sometimes a watered down product, which is ironically less interesting, and which inevitably leads to smaller crowds. This in turn theoretically leads to changes in the product aimed at curtailing the shrinking buyrates and satisfying the smart core audience again. Like I said, it’s a weird little feedback system.

The same system is observed in other mass media “art”, like pop music and Hollywood filmmaking. When a thing is found to evoke a strong audience reaction, that thing –like boy bands or Bruce Willis movies– is reproduced to the point of irrecognizable dilution, and the audience reaction wanes.

In the realm of the self-identified “true” artists, insofar as such a thing is understood in the world of Smok, pushing the evolution of the art is much more important than eliciting a reaction from the audience. This, in my opinion, is in direct opposition to the dictates of Tolstoy, discussed in an earlier column, which essentially state that art involves the “evoking of a feeling in oneself” which is then necessarily transmitted to an audience.

This Smokkish disdain for the audience I’ve seen in recent McMahon antics, which seem to insist that anything issuing from Brain-de-Vince is the artform, whether or not the audience approves. It sees a weak reflection in something I’ve often heard wrestlers say in interviews, something about how much “power” they weild over the audience. Hogan is guilty of it when he talks about getting the fans to cheer or boo him, based solely on his expressions or antics.

What such wrestlers fail to understand is the covenant between wrestler and audience. They wield no power to control our reactions. Rather, we agree to respond, as part of our relationship with the artform. To confuse such agreement with actual influence is to court Smokkish delusionalism, and to allow for the possibility that the art is actually important in absence of the audience.

In this sense, wrestling is a good example to apply to the snootish purveyors of “high art.” Wrestling is, in essence, a collaboration between fans and performers, involving product feedback loops and an unspoken covenant between those performing rites on stage, and those with the true power, who indicate whether certain rites are worthy of collaboration.

This is giving me a headache. Until next time, I’m Raywat Deonandan, desperately in search of Ibuprofen.