This article first appeared in the Hill Times on Dec 5, 2016. The authors retain all copyrights. 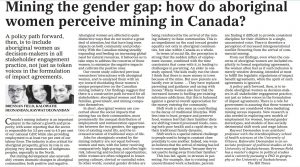 Canada’s mining industry is an important player in the nation’s growth and prosperity, with some reporting that the sector is responsible for 3.5 per cent to 4.5 per cent of our national GDP, while also providing employment to at least two per cent of our labour force. The industry is also critical for aboriginal prosperity, given its role in employing very large numbers of indigenous peoples, especially in the North.

But mining development also unavoidably creates dramatic changes in aboriginal communities, both positive and negative. Aboriginal women are affected in quite distinctive ways that do not receive a great deal of attention, but that have long term impacts on both community and productivity. With the Canadian mining steadily expanding and feeding an increasing global need for natural resources, it behooves us to take steps to address the concerns of these women, to minimize the negative impacts and cultivate the positive ones.

Our recent study collected previous researchers’ interactions with aboriginal women, and re-analyzed them with an eye toward elucidating those women’s unique perspectives on the Canadian mining industry. Our findings suggest that there is a constructive path forward for all stakeholders: aboriginal women and their families, government, and mining companies themselves.

In short, aboriginal women are concerned about the social impacts that mining has on their communities, most prominently the unequal distribution of employment and remuneration opportunities between the two genders, the aggravation of existing social ills, and the increased erosion of traditional ways of life.

Jobs for aboriginals created by the mining industry are not equal between women and men, with the latter receiving comparatively high-paying, and often high-risk, labouring and technical opportunities, while women are often relegated to lesser-paying culinary, clerical or custodial roles. In other words, societal gender divides are being reinforced by the arrival of the mining industry in these communities. This is an impediment on the road toward gender equality not only in aboriginal communities, but also within Canada as a whole.

In terms of social ills, the perception is strong that the sudden influx of employment income, combined with the time constraints that come with it, is leading to challenges in parenting. An elder in one study opined, “the kids really run the show. I think that there is more money in town because of the mine. But now parents are hardly ever at home. … They have replaced parenting and guidance and caring with money.” Many women also fear that the increased income is fuelling pre-existing substance addictions. But this is balanced against a general overall appreciation for the money entering the community.

Shift work is also seen as contributing to the decay of traditional lifestyles. With less time to hunt, prepare and preserve food, women feel that their families’ diets are shifting toward processed foods, causing both poor health and a rapid decay in their traditional family dynamic.

Shift work is a special cultural challenge to people used to being in constant close proximity to one another. Indeed, one woman believes that the arrival of mining has led to more marriage failures, “because they’re not used to being away from their families.”

This has led, again, to stresses in parenting. For example, due to rotating and uncoordinated work schedules, parents are finding it difficult to provide consistent discipline for their children in a single, uncontested voice. There is therefore a perception of increased intergenerational conflict flowering from the arrival of commercial mining.

From our findings, even when the concerns of aboriginal women are included explicitly in formal negotiating agreements, the women often feel as if such inclusion is merely window dressing, intended at most to fulfill the legalistic stipulations of impact benefit agreements, while the spirit of such agreements is ignored.

A policy path forward, then, is to include aboriginal women as decision-makers in all stakeholder engagement practice, not just as token voices in the formulation of impact agreements. There is a role for government in assuring that these women’s concerns are considered when mediating mining access requests. New research is also needed in exploring new models of employment for women, beyond gender stereotypes, and models of less socially detrimental shift work and wage labour.