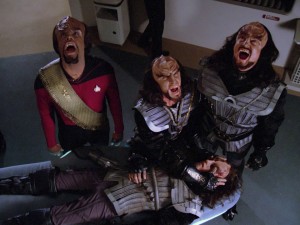 “The wrestling hero seeks the ritual death of the heel… all in the name of love.”

Thanks for all the great feedback from my debut column last week. You know, in my professional writing career, I’ve written two books and over 100 newspaper and magazine articles –yet that was the most feedback I’ve ever received for any single piece of work. I think that’s an indicator of the unique interactivity of this particular subculture.

Of course, in every good intention there’s always a speck of malice. In every batch of friendly email there’s always one developmentally challenged, foul-mouthed miscreant. So let me state my policy for the record: I will brook no rudeness or disrespect. Anyone choosing to communicate with me in a derogatory fashion will receive a single response containing one or two suggestions on how best to explore his obvious latent homosexuality. Thereafter, his letters will be deleted without being read.

And now the new stuff…

Some years back, when the Internet Wrestling Community was young, a woman wrote an article about the romance of professional wrestling. No, she was not writing of soap opera affairs the likes of that between the Macho Man and Miss Elizabeth, but rather (I think) of wrestling as romantic theatre. She wrote of Bret Hart, bedecked in pink, pleading through gesture his heroic love for Sting, who rebuked him at every turn. She might just as well have written of Hogan and Savage embracing as the Mega Powers, physically expressing brotherly heroic love in the same tradition as Frodo and Samwise in the Tolkien classics.

As a woman, the author of that long-forgotten article was somewhat immune to the predictable asinine homophobic responses from that ever present stunted minority. It is, after all, a touchy thing to discuss the theatre of wrestling, using words like “romance” and “love”, for fear that the over-sensitive closet cases would come screaming to your inbox. But such I shall nevertheless attempt.

The drama of wrestling is quite unlike other kinds of modern mainstream performance, and more akin to the morality plays of old Europe. In such plays, Good always faced off against Evil, and always prevailed in the end. Evil only ever took the upper hand when it cheated. Today’s product has admittedly blurred the line between Good and Evil, with anti-hero “tweeners” playing the roles previously reserved for the Good Guys. But the format is pretty much intact: though of flawed character, even the tweeners are righteous.

In this sense –that wrestling’s Good Guys are vulnerable warriors battling Evil despite great odds– this particular brand of performance art takes its cues from ancient Greek theatre, wherein flawed heroes pursued grand quests while being both hindered and helped by all-powerful gods. The parallels are obvious: on-screen owners (and often their resisting spouses) are the deities, while title belts are the golden quests.

Many writers have commented on the wrestler as classic hero, so I will not bother. The point I will make, though, is that classic heroism resonates across hundreds of generations of readers and watchers because of a number of simple but vital themes, among them these things we call “romance” and “heroic love”.

The elements of literary romance include: the quest, often centred about love (through plot and character motivation), some kind of conflict between immorality and chivalry, and a rolling narrative fraught with tragedies and redemptions, betrayals, conquests and reconciliations. Classic romances of this type include “The Three Musketeers” and “The Legend of King Arthur”. For our purposes, one could add to that list “The Saga of Randy Savage and Elizabeth”, “The Tale of Taker and Kane” or even “Austin-McMahon”, if you leave out the love bit.

Legendary literary critic Northrop Frye explained the plot of a romance in four stages: agon (conflict), pathos (suffering), anagnorisis (recognition) and sparagmos (ritual death). In the wrestling storylines which follow this pattern, the conflict and the suffering stages are clear: there is often a powerful instigator (e.g. Mr. McMahon) who torments an otherwise peaceful protagonist. The ritual death phase is also evident, for what is the blow-off match of a lengthy feud but simply the stylized “killing” of the heel? It’s in the third phase, anagnorisis (recognition), that our analysis gets interesting.

In a tragedy like Oedipus Rex, the “recognition” occurs when Oedipus realizes he has married his own mother. It is the signal for his downfall and the culmination of the story and conflict. It is also a recognition that his passions, or his loves, have guided his motivations and have brought him to the point of tragedy. The Greek ideal of heroic love, embraced in the standard wrestling tale, was understood by Plato to be the most important kind of human motivation. Today’s version of Platonic love is that of a non-sexual relationship between friends. Recognition of that love takes the wrestling storyline to its endgame.

When Hulk Hogan and The Rock learned mutual respect at Wrestlemania 18, they were awash not only in self-love, but in mutual Platonic love. To many, Austin-McMahon was an incomplete story cycle with no resolution; it lacked the requisite recognition by both parties of mutual heroic love (later sloppily thrown together at Wrestlemania 17). Some of the most charged feuds involve brothers or tag-teams torn asunder, their mutual love cleaved by an interloper or by a grander love for glory or for the golden belt. It is “recognition” of the strength and persistence of brotherly love which brings such teams together again, closing their story cycle with the ritual death of a third party, a darker heel.

If we can manage to temporarily divorce ourselves from our bias toward a sexual context for the terms “romance” and “love”, it becomes evident that the basis for heroic storytelling –the foundation for all good wrestling feuds– is the cycle of literary romance motivated by Platonic heroic love.

As Socrates declared in Plato’s Symposium, “I… profess to understand nothing but matters of love.”